An approach to the asylum seeking in Moldova: Interview with Dinu Lipcanu and Paknehad Ahmad Djavid 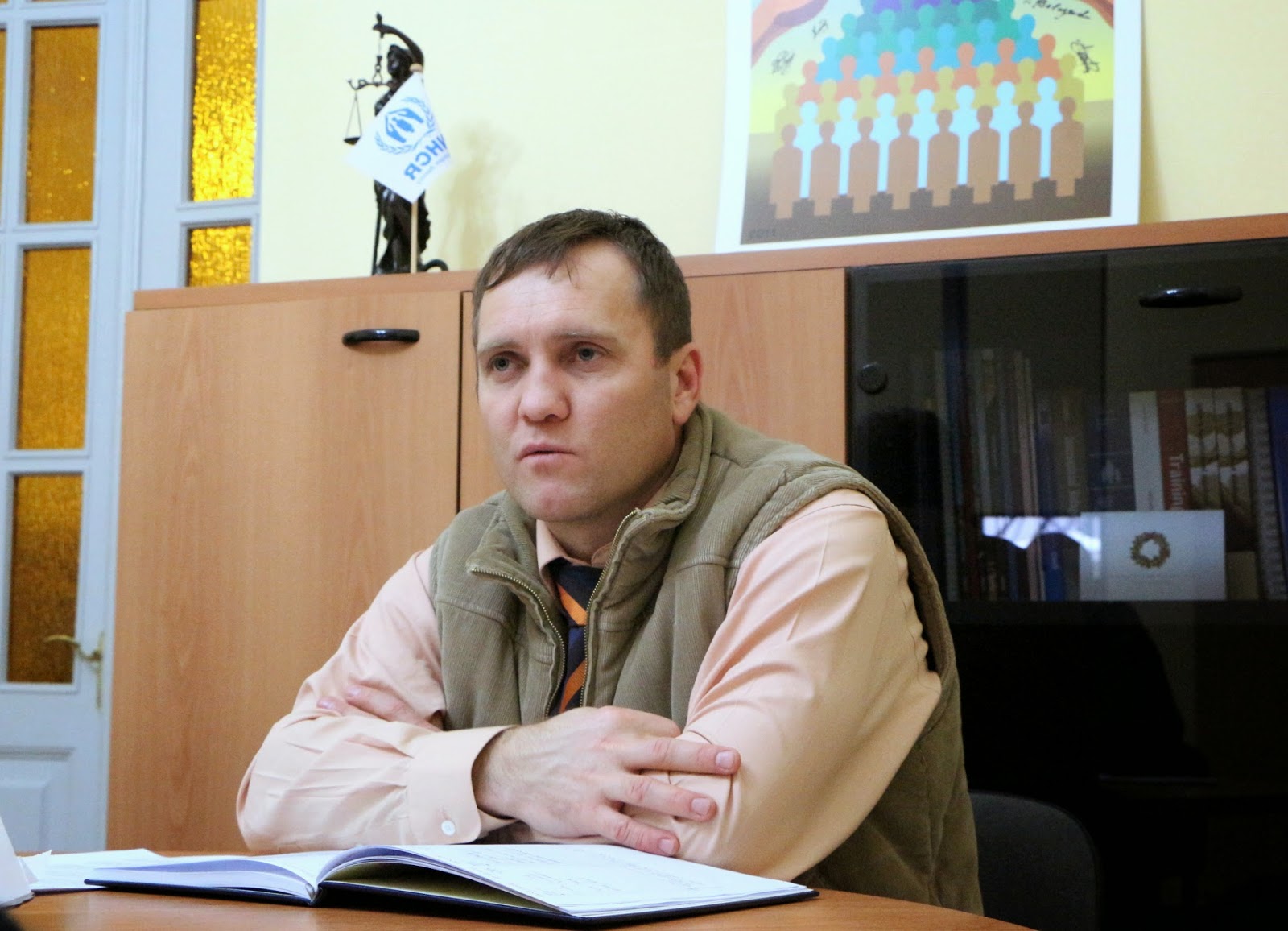 Can you provide us an overview of Moldovan asylum system and of the role of the UNHCR within it?

Moldova signed the 1951 Geneva Convention but UNHCR established itself in the country in 1997 and during the following four years it was managing refugee status determination process on its own. In 2001 Moldavian government instituted a responsible authority called Bureau of Migration and Asylum, which has gone through some changes in its structure but it is active until today. The Bureau is now responsible for the asylum system, the refugee status determination and support for the refugees in Moldova. Nevertheless, due to the scarcity of financial resources, UNHCR complements some of the needed supporting activities, such as social, legal and cultural assistance for refugees. To this aim, it collaborates with three NGOs partners which are covering and implementing those fields.
Moldavian asylum system provides two forms of protection: the refugee status and humanitarian protection (the latter is the most given form of protection). They differ only in their validity period (5 years for the refugee status and 1 year for the humanitarian protection) while they are totally equal from a legal point of view, since they grant the same rights. Plus, it's worthy to say that a refugee in Moldova has almost the same rights as a citizen, except for voting right.

What are the specific activities ran by the NGOs you are collaborating with?

They deal with the so-called protection dimension of refugees within three different frameworks. The legal one means providing free legal assistance, depending on the case and on its complexity and we fund also legal representation in the court. Moreover, our legal partner monitors the borders: experts periodically go to the crossing points to check if asylum seekers get access in the country and they constantly collaborate with borders authorities in order to make them aware of the issue. Then, social assistance basically support refugee access to education by providing school supplies and healthcare, which in Moldova is based on the so-called compulsory healthcare insurance. That means that the system covers only the first two days of emergency, then the patient should have the insurance which can be paid by the person himself or can be provided by the person's employer. So, for refugees there is a temporal gap at the time of their arrival when they have no granted assistance that we must fill. Furthermore, our NGOs partners offer also cultural support in terms of training and events which help refugees to learn the language and to know Moldavian traditions.

Yes, they do. There is monthly distribution of financial assistance and the decision about who will receive it is taken by a multifunctional committee, which is formed by UNHCR, the Bureau of Migration and Asylum and the three NGOs partners. The applications for financial assistance are carefully examined by this committee, which will eventually approve or deny them depending on the case. If the application is successful the person will get 80 dollars per month for a maximum 6 months period, which is the maximum legal term for accomplishing asylum seeking process. That means within 6 months starting from his arrival, a person will get an answer about being recognized or rejected as asylum seeker. Once his status is recognized, he can look for a job and we therefore interrupt the assistance (except for some cases, of course).

Do refugees usually manage to find a job?

As in many Eastern Europeans countries finding a job is not easy or, at least, finding a well-paid job. Having said that, it is surely possible in every case even though the job maybe doesn't fill the refugee's expectations. It is also true that the most the people of our concern choose to have an unofficial job because of the higher wages it can provide. It is a quite common phenomenon we can fight as UNHCR only via promoting official employment, since we cannot influence refugees own decisions, it's not our task. What we do implement are the so-called self reliance grants: we support refugees in writing small business planes, and then we can give them a subsidy to start the business. There are some successful business ran by refugees here in Chisinau, mostly in the service sector (food shops, goods transportation, etc.). Also, we have a pilot project for housing in cooperation with local authorities: we renovated a couple of apartments and refugees are living there without charges so they can save money in order to buy their own apartment. Of course, there is also bad example of people who couldn't manage to find a job but I would say that if a refugee has ideas and he works hard on them, he will surely have the possibility to get a rewarding occupation.

How many refugees there are in Moldova and where they usually come from?

At the moment there are around 340 refugees and 150 asylum seekers. Maybe one of the most common countries of origin is Afghanistan and then the former soviet republics in Asia. More recently, especially in the last couple of years, refugees coming from Syria increased and reached around 40% of the overall number. Also, there is a similar trend from Ukraine, since the crisis started one year ago. They choose Moldova as country of asylum because of its closeness and because of the language, even though some of them are actually IDP (internally displaced people), which means the managed to find protection in another part of Ukraine.

Do you think the majority of asylum seekers want to stay in Moldova or they see it mostly as a crossing country?

Most of the people are staying here. As I previously said, some of the asylum seekers already share some elements with Moldavian country, like the language. Therefore, they can quickly adapt themselves to Moldavian reality and they can easily work, study and have a family. In our opinion Moldova is a good country for asylum seekers: you can earn enough for living and it has a quite peaceful and tolerant society. According to what we know, there are no cases of harassment or xenophobia; at least we were not informed of them. Even in the more urban context of villages, where some refugees live, they are perfectly adapted: they interact with the local community, they work, and their kids are going to school...

Do you work in Transnistrian region as well?

We are not present in Transnistria because it represents a very sensitive issue. Moldova government has no authority there and, since we are collaborating with it, we cannot go there as well: we cannot be sure about our staff's and our partners' safety. Nonetheless we constantly monitor the situation and we offer remote support to refugees who are living there. Of course, for most of the administrative issues, people are coming at our office in Chisinau or at the Migration Bureau where they get normal assistance; otherwise it is impossible to help them directly there.


Interview with Paknehad Ahmad Djavid, Director and Project coordinator at The Charity Center for Refugees (CCR) 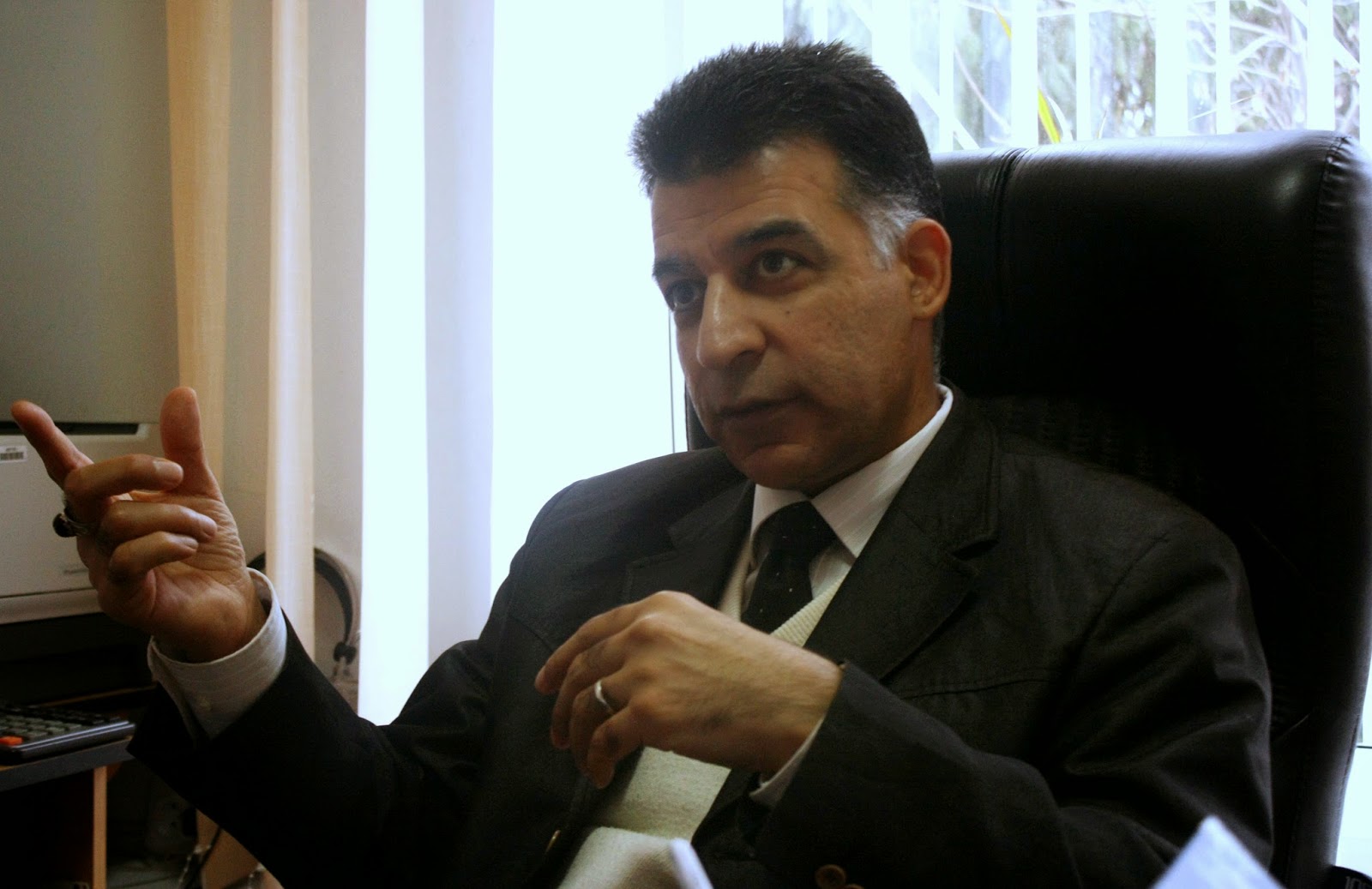 *The Charity Centre for Refugees is a non political, non religious an apolitical organization. It was created in October 1999 with the support of the United Nations High Commissioner for Refugees (UNHCR)


Can you make a brief description of the activities that you do in the CCR?
We organize different workshop with the asylum seekers and refugees:  for example we have Romanian language courses organized  in collaboration with Ion Creanga University. We have computer lesson, we teach them how to find a job or an apartment. Also, besides helping refugees and asylum seekers with these integration basic steps, we ran art and cultural workshops, such as painting, handicrafts, ceramic curse, and we set up some sport events, since we have a gym. Then, we care about letting refugees know more about Moldova society and traditions: we have cooking lesson, where the refugees can show their national dishes and learn how to prepare Moldovan food; twice a year we organize trips out of Chisinau, to visit historical places; sometimes we organized round tables, about different topic.

Do you organize also activities to spread awareness into the local society?
Yes, we organize different events (ex. women day, children day, refugees day, Muslim day, Christmas, Eastern Day) with the support of the European volunteers which are here with the European Voluntary Service (EVS).  We make our best to target different audiences and all of these activities are open to the local society because they’re fundamental for integrating refugees at a social level. Even though sometimes we had problems, I have to say that the general situation in Moldova is positive.

Do you work mostly in Chisinau or some activities are also offered outside of Chisinau?
Our office is in Chisinau but part of our team is settled out of the capital and we go sometimes to other regions.  For example, we often have to go to Transnistria (Tiraspol, Bender, Dubasari), even though Transnistria has some internal procedure to deal with refugees. Plus, we have local integration projects: we renovated two old buildings in two surrounding cities  in Moldova; there in both of the towns some families are hosting around thirty refugees. We try to increase tolerance towards them trough different activities.

How do you integrate so many people from different background in the same community?
We do not split people among believes, religion or gender. I think that doing so is a big mistake. You are a person and you need help, so you are welcome in here.  Some of the people we have here think that is going to be easy to earn a life, but sometimes is complicated, they paid money in their origin countries in order to come here and when they arrive the situation is complicated for them. The main handicap for them is the language because it makes job search harder. For example last year we had lot of people from Ukraine, and even they are able to understand Russian it was difficult to find a job since they cannot speak the state language. But anyway is easier for them than for the people coming from Syria. In some cases to overcome the language problem we try to provide them with some equipment to work in factories, so this is the way they can start to understand the language. And in another occasions they just go to some working places where they do not need the language, for example the Arabic people can easily find a job in a kebab restaurant.

Do you work with other organizations?
We have several partners, local as well internationals. We have partnership with several European embassies, with the Bureau of Migration, with the NGO “Avi Copiii” and with Clowns without Borders.

What outcomes have you realized in these working years?
I would say that the integration process is generally successful and that is getting better. What we do is studying every case individually and  then we discussing about the problems and we have trying to find the best solution for everyone; we try to help asylum seekers and refugees in every fundamental step towards integration. From managing the bureaucratic procedure in the Moldovan legal framework at their arrival, providing language support, helping them to find a job or open a small business, to building their homes or giving them access to water and electricity. 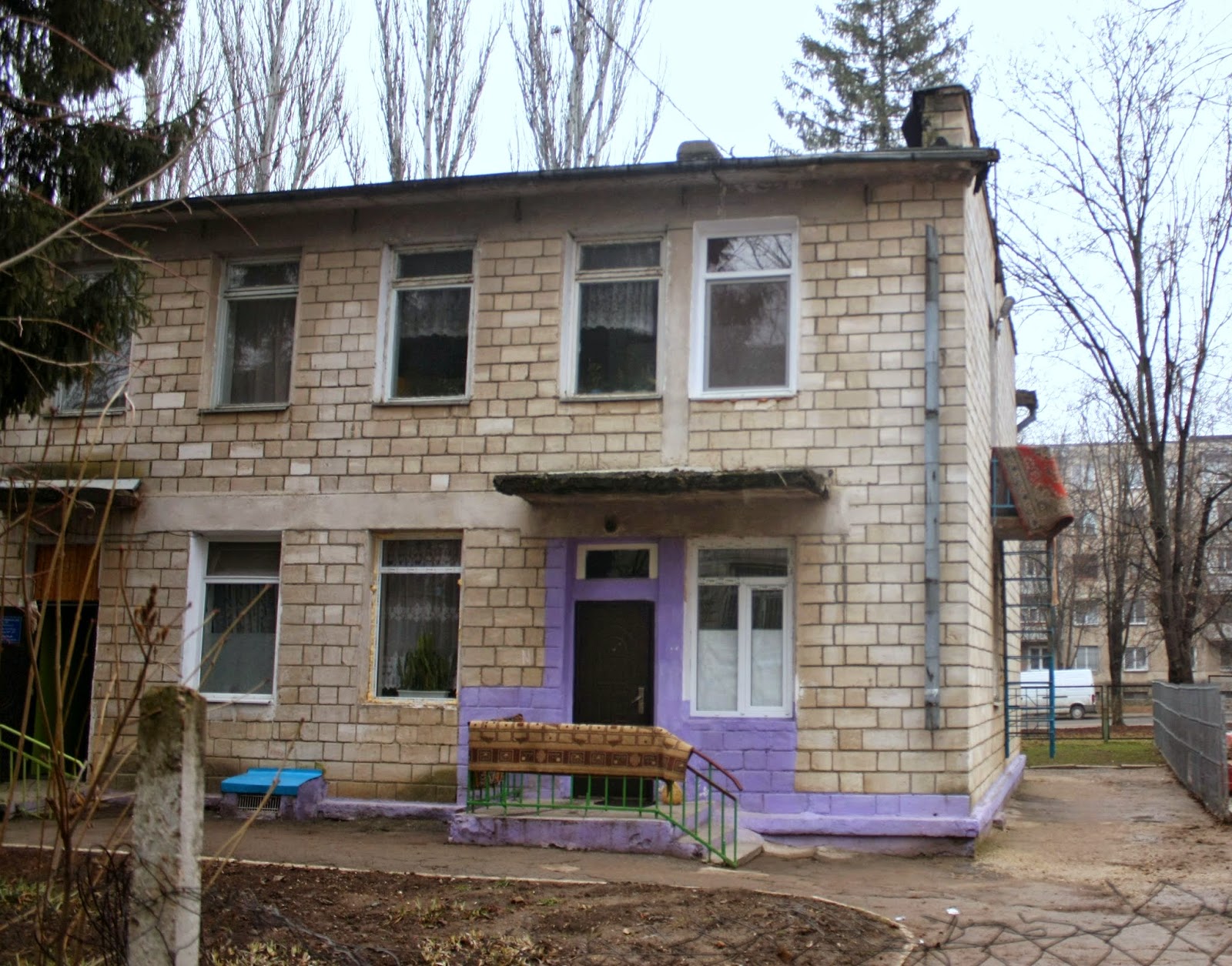 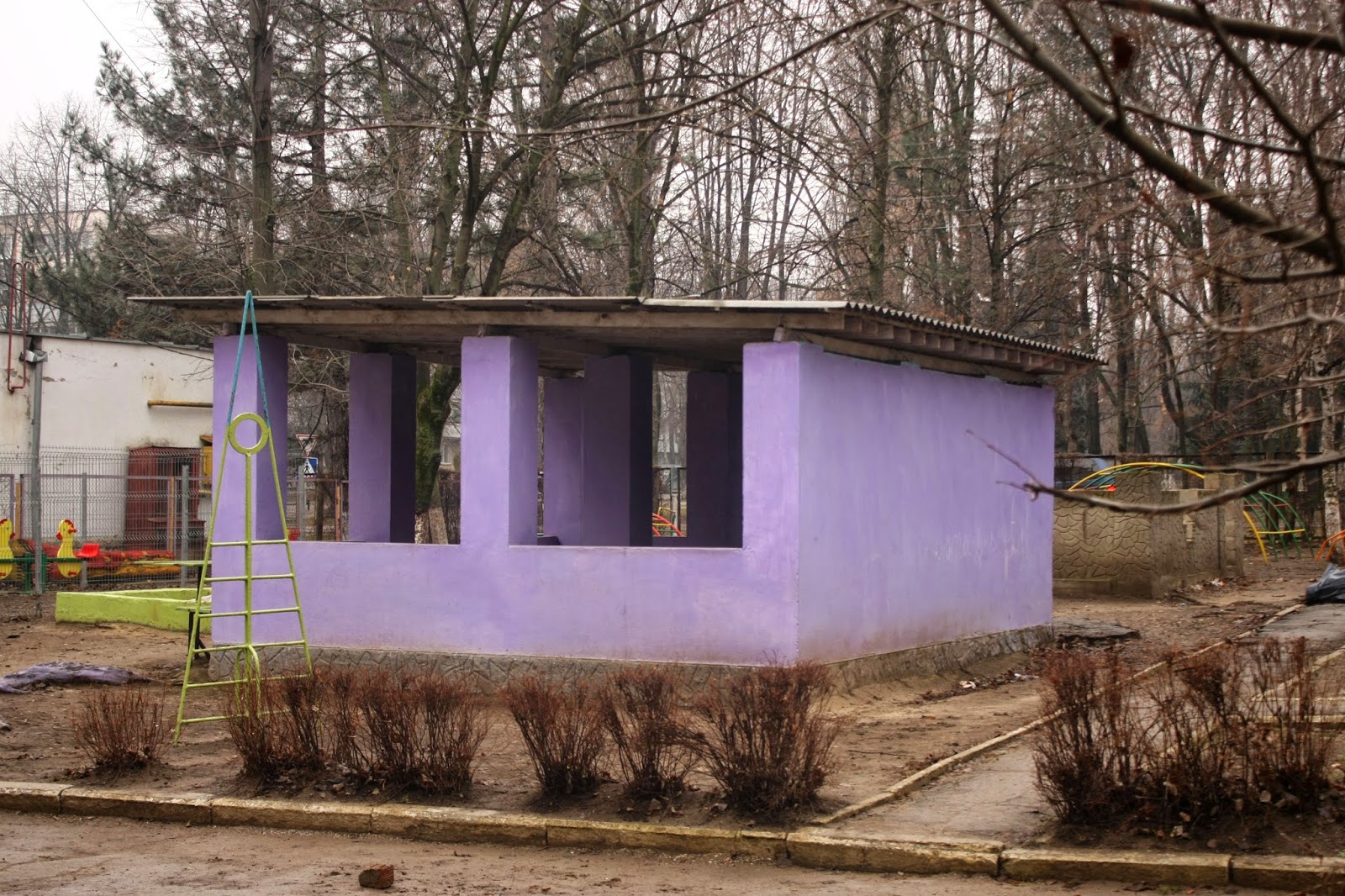